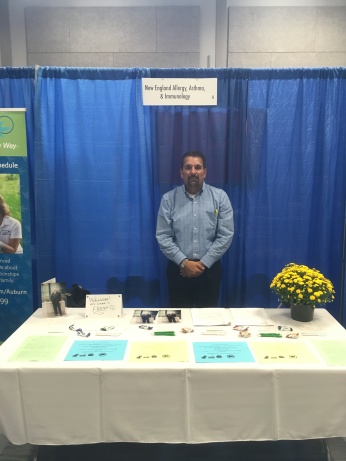 Frank DeCaro, the Quality Administrator at the practice, offered free allergy screening for the expo’s attendees including dog, cat, mold, and dust mite at our Hooksett location. He also discussed the practice’s services, went over preventative care tips for seniors and how to manage their health.

Please feel free to call 978-683-4299 to schedule your free screening in Hooksett, NH or any of our other locations!

Please click on the link below to see our tentative marketing calendar. The calendar will be updated each month if there are any changes.

One of the conditions that allergists encounter in practice is Primary Immunodeficiency Disease (PID), usually manifesting as chronic severe recurrent sinusitis accompanied frequently by episodes of pneumonia and abnormalities in immunoglobulin assays.

A method of screening for this condition is to be alert for patients who present with allergy‑like symptoms on a recurrent basis but who prove to be negative on skin testing and serologic testing for evidence of allergy or IgE antibody activity.

Measurement of serum IgG and IgG subsets (IgG1, IgG2, IgG3, and IgG4) will also provide a further clue if these are abnormal.

IgA and IgM should also be measured along with total IgG, as many times, one or more of these additional antibody levels are abnormally low.

Therefore, anything that is less than normal is significant in measuring these antibody levels.

If a patient has any of these, then it is important to pursue a primary immunodeficiency workup.

This consists of measuring baseline antibodies to diphtheria, tetanus, Haemophilus influenzae, and the 23 serotypes of pneumococcus for current antibody levels.

As soon as the blood is drawn, vaccines can be administered to these substances, and subsequently over four weeks a response to the vaccines will occur.

Redrawing the patient’s blood at four weeks and then analyzing for the new antibody levels which result from the vaccines and comparing these with the baseline antibody levels collected a month earlier allows one to determine whether or not Primary Immunodeficiency Disease is present.

A response to diphtheria or tetanus which is less than 10 fold over the baseline is considered abnormal. Haemophilus influenzae is a conjugate vaccine and the patient may respond to the protein moiety which is contained in diphtheria and tetanus or to the lipopolysaccharide moiety which is the actual bacterium and its antigens.

Pneumococcal antigen testing should be the 23 serotype variety and not Prevnar conjugate vaccines. There is a discussion of the importance of this below.

A response of four fold over baseline of 70% of the serotype testing is considered normal.

Anything less than this is abnormal.

Once all of these studies are done and if abnormality is found, the appropriate thing to do at this point is to see a Board Certified Allergist and Immunologist, one who is certified by the conjoint board of the American Board of Internal Medicine and the American Board of Pediatrics in allergy and immunology.

Subsequent testing will determine the type of primary immunodeficiency that is present and the patient may require intravenous gammaglobulin infusions which are usually given once a month and are associated with resolution of recurrent infection, arthritic symptoms, pulmonary symptoms, gastrointestinal symptoms, and skin manifestations of common variable immunodeficiency and all of its subtypes.

Being aware of primary immunodeficiency and its workup is integral to providing the patient with an adequate evaluation of symptoms when the patient proves to be negative on skin testing and serologic testing for evidence of allergy.

New England Allergy is pleased to announce that we offer free allergy screening for new patients!